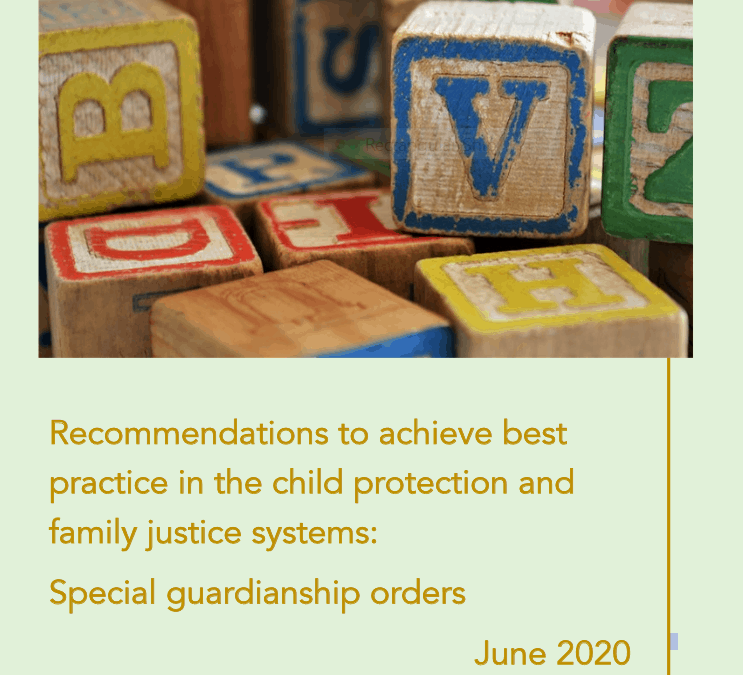 Two documents about special guardianship were published in mid June: A Public Law Working Group/Family Justice Council report and a Nuffield Family Justice Observatory research briefing on special guardianship orders (SGOs). The President of the Family Division has described practice guidance contained in the report as comprehensive and authoritative and has published this with his complete endorsement. He says on the Judiciary website that the guidance should now be applied and used in every case where a SGO is an option.

SGOs were introduced in 2005 as another option for permanence for a child, giving the carer a greater share of parental responsibility (PR) than under a residence order but not a complete transfer of PR as takes place with adoption. Although generally considered a success, a number of controversies have emerged in recent years about the use of SGOs. These are mainly whether the courts are giving local authorities and potential special guardians sufficient time for full assessments to be undertaken and for everyone to fully understand the implications and effects if the order is to be made, which will last until the child turns 18. Associated with these issues, special guardians receive minimal advice and support from local authorities, compared with foster carers, although there is little to distinguish between the extent of children’s welfare needs.

The guidance to courts and professionals

1. ‘More robust’ (i.e. stronger) and more comprehensive special guardianship assessments and support plans with ‘renewed emphasis’ on the child-special guardian relationship, whether special guardians are caring for children on an interim basis before a SGO is made, and the provision of support services

The ‘renewed emphasis’ refers to the importance of planning for SGOs on the basis that they are intended to last until children become adults and not as just short term arrangement. The point about interim arrangements has arisen because SGOs were originally envisaged as being granted where a child was already settled with the applicant. However, in recent years, SGOs have sometimes been made where the child has no pre-existing relationship with the special guardian (who would be a relative or otherwise connected to the family but has not been looking after the child). The provision of support services has to be covered in the plan (a Special Guardianship Support Plan or SGSP).

Although a judge will require a ‘robust’ SGSP before making an order, under the first recommendation, this second recommendation is not something that a judge can enforce in an individual case. It is directed at local authorities.

3. A reduction in the use of supervision orders with special guardianship orders

This recommendation clearly directs judges to try to avoid making supervision orders alongside SGOs, in response to research from the Nuffield Family Justice Observatory published last year that found that 30% of SGOs made in 2016-2017 also had a supervision order. This had risen from only 18% in 2010. Taking the precaution of adding a year’s supervision to a SGO would suggest that there was a lack of confidence in the sustainability of the arrangement. Possibly, the number of supervision orders has been dropping since the research was published.

This is to include careful thought about the purpose and nature of contact arrangements and the professional input that will be required to support contact into the future.

The working group has also made four aspirational recommendations for longer-term change:

This is contained in Appendix E to the report and states that the SGSP should ‘explicitly address any harm that the child may have suffered and the capacity of the prospective SG to enable the child’s developmental recovery from that harm’. This requirement acknowledges the reality that children going into special guardianship may have suffered trauma and will need reparative parenting.

A full assessment will include a ‘full exploration with the prospective SG of their past and current personal and family experiences, including their experiences of parenting’ and (where there is one) their relationship with the child. This does not rule out an applicant who has no existing relationship with the child but in such a situation the assessment will be based on ‘what the prospective SG knows or has experienced when it comes to parenting, family life and other key issues such as financial and practical resources both in the present and the past’. The new guidance doesn’t sound averse to a SGO application by someone the child doesn’t know, but this specific sentence and the guidance further on about interim placement should improve the likelihood of a stable placement.

Probably the most troubling aspect of SGOs since the introduction of the time limit of maximum 26 weeks to complete a care case, in 2014, is the way assessments are rushed if a possible SG comes forward after the care application has been made. Although a SGO is not supposed to be made in less than three months, which would give the local authority and the applicant a decent interval to complete an assessment, judges have discretion to expedite this. It was not unusual for some judges to insist on a full assessment being presented within just a few weeks. This risked a rushed and pressured process for social workers and the family. The problem was that if potential SGs were identified or came forward once the 26 weeks had begun, this could delay a final order beyond that period. The intention of the 26 weeks limit was to reduce harmful delay for the child so there was a conflict between that principle and achieving a timely but thorough assessment. This has been addressed by the new guidance saying:

‘The focus will always be on welfare and the fundamental requirement for a robust, evidence-based assessment. That will be the guiding factor as opposed to the statutory timescale of 26 weeks.’

The guidance gives judges the power to take the case out of the 26 weeks track and have it logged in a separate database, so that cases where a realistic option of a SGO emerges during the proceedings won’t skew the court’s statistics.

The report considers the options of testing out a potential SGO in situations where there isn’t a settled living arrangement already and what sort of order should be made while the assessment are going on. If there is no interim care order or s 20 agreement the child will not be deemed to have moved from being looked after so will not be eligible for the limited care leavers’ support when they are older. Other options would be an interim SGO or a type of interim placement order. However both these would require new legislation to be passed. The most used current options are:

The best practice guidance also includes some points on SGOs being made for carers living overseas.

The Working Group report has footnotes and links to relevant research produced through the Nuffield Family Justice Observatory. It would have been useful for the Judiciary website to include a link to the new briefing paper that summarises the FJO’s own work and leading studies in a succinct 9 page update. The briefing identifies three key considerations arising from research:

Interestingly the report says that it is ‘imperative’ that the ADCS, ADSS Cymru, ASGLB, Cafcass, Cafcass Cymru, DfE, MoJ [and] Welsh Government to all endorse the guidance. I can’t see whether any of them have.

The report points out that more SGOs are now being made than placement orders so it is worrying that they are still taken so much less seriously than adoption preparation and investment.

It’s disappointing but not surprising that the new guidance has not reinforced the original three month notice period to allow a full assessment nor been more directive about ensuring that the SGO applicant is someone known and trusted by the child before an order is made.

We now have parallel sets of guidance, for political reasons. Best practice guidance, even with this level of judicial backing, is not enforceable in the same way as the statutory guidance/code of practice on SGOs issued by the Department for Education and by Welsh Government. However, we can hope that it will all be viewed holistically and become embedded in local practice.