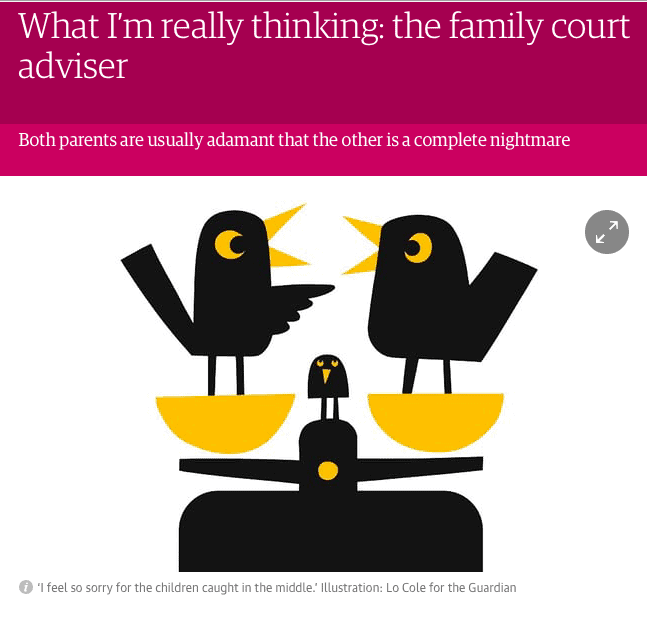 The strapline reads “Both parents are usually adamant that the other is a complete nightmare”. That is a familiarly depressing scenario for anyone involved in private law proceedings (disputes between parents about arrangements for their children). Also familiar is the description of complete incompatibility between the two accounts. Clearly, they can’t both be right.

So what is a CAFCASS Officer to do when faced with such a dilemma – asked to make a recommendation to assist the court what approach should they take? This officer suggests :

It is down to me to attempt to unpick which parent is lying the most. Sometimes talking to the children helps me find out, but you can’t ask them to dish the dirt on their parents, unless they volunteer it.

This is really worrying. It is undoubtedly important for the court process to do its best to get to the bottom of what is really going on and CAFCASS, as the “eyes and ears” of the court, are an important part of that process. But it ISN’T the role of  the FCA to decide who is lying. Nor is it their role to hope a child might just happen to “disclose” the answer to the question of whether a parental allegation is true or not. It is also unhelpful to see incompatible accounts described as inevitably dishonest (“which parent is lying the most“). As any judge or trial advocate will know (and indeed as any FCA ought to know) a witness or litigant may give a false account for many reasons – it may be knowingly untrue (a lie), it may be misremembered or mixed up with another event, it may be exaggerated or it may be genuinely believed but wrong. It is sad to hear that this officer operates from a starting point that neither parent is honest or accurate. They may well not be, but we have a trial process that tries (as far as any system is able) to work out whether either parent can be relied upon.

The anonymous FCA goes on to say that :

Sometimes my sympathies, and the evidence, come down clearly on one side. There’s the father who has always controlled his family and now seeks to carry on doing so by other means. Or the mother who has a new man in her life and wants to wipe all traces of the previous one. Mostly I file a report to the family court suggesting something that won’t please either; but a court can’t legislate that two grown adults must be nicer to each other.

I think it is important that families understand that where there are allegations of abusive behaviour (domestic abuse or abuse of a child) and those allegations are not accepted as true, those allegations must be proved before they can be relied upon by a party or by a judge in making decisions about a child. They are not proved by appealing to the sympathies of a FCA, or persuading him that the evidence is convincing – they are proved only if the judge is satisfied, after hearing that evidence and hearing it being testing, that the allegations are more likely than not to have been true. Bluntly, the FCA’s hunch is neither here nor there. It might be right but it might be wrong.

It is quite acceptable for a CAFCASS Officer to make a recommendation that there doesn’t need to be any finding of fact exercise about certain allegations because they are unlikely to make a difference to the ultimate recommendation, or to recommend that the allegations are so important that they really must be sorted out first before any further analysis is carried out and before any further significant steps are taken.

Put in simplistic terms : if some hotly contested allegation is sufficiently important for a CAFCASS Officer to form a view on it before making a recommendation – it ought to be the subject of a finding by a judge (either a separate fact finding hearing or if more straightforward at a rolled up final hearing at which a CAFCASS Officer has made either/or recommendations). And if it isn’t sufficiently important for the judge to rule on it then why go there? There is no category of slightly important disputed fact that the judge delegates to CAFCASS to decide on her behalf.

I worry that this particular article will encourage parents to think that there is some merit in investing their energies in recruiting the CAFCASS Officer to believe their version of reality (as some plainly already do). I don’t think that will assist with the conflict dynamic, and it potentially damages CAFCASS’ neutrality and utility to the court – the report of a FCA who has jumped to a hasty and wrong conclusion is largely worthless to a judge. However, this FCA will not be the first or last to have blurred these boundaries between the roles of social worker and arbiter of fact : In 2016 I attended an event on behalf of The Transparency Project at which the CAFCASS Principal Social Worker said in terms that it was part of the role of the FCA to conduct a “mini-fact finding hearing” (see here). I challenged her on this at the time, and this resulted in what I would class as a row-back from the head of CAFCASS Communications via an open letter.

Whatever that open letter says, our anonymous social worker certainly seems to hold very similar views to those raw views expressed by his or her principal social worker in 2016. The concern would be that this is an illustration of a more widespread error about the function of CAFCASS. What is most worrying about this is that in many of these cases today there will be no lawyer to spot and articulate these points on behalf of a litigant through legal submissions or cross examination, and there is a real risk that a judge will accept a recommendation without proper interrogation of the facts.

I’m not saying that the line here is easy to walk (you can see our discussion of the issue at the time of the CAFCASS Open letter here, which illustrates the difficulty) – but in expressing the task as about truth, the anonymous FCA compounds the difficulty for litigants in understanding the way the system works and in what they should expect of CAFCASS and of the judge.

A recommendation that an allegation should be ignored because it could never be relevant to the welfare decision is a legitimate social work judgment – a decision that it should be ignored because it is cooked up as a block to contact is another thing entirely. In times of such pressure on the system it is tempting for judges and FCAs to short circuit the process by relying on the CAFCASS view of the validity of such allegations, but it is wrong in principle for them to do so and imperils the welfare decisions that are being made on behalf of vulnerable children in conflicted situations.