What is ‘gaslighting’ and what does it mean in family court cases? 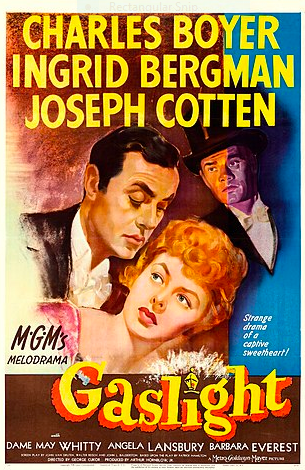 We have noticed assumptions that family courts are familar with the terms ‘gaslighting’ and ‘being gaslit’, but is the meaning widely known and understood? A straw poll suggests not. This post will look at the origins of the concept, and its occurrence in modern case law and policy.

A summary on wikipedia of the increasing use of the term pays little attention to its origins and continuing relevance in domestic abuse, and more to the political interpretation of ‘blending modern communications, marketing, and advertising techniques with long-standing methods of propaganda’ and headlines such as ‘Trump is gaslighting all of us’. In other words, gaslighting is a synonym for lying. However. it is more complex than that.

As a long time admirer of the work of Patrick Hamilton, I thought I understood why gaslight (the title of one of his plays) was becoming a verb in cases of domestic abuse. I say ‘admirer’, not ‘fan’, as Hamilton’s work is relentlessly bleak and his characters are either horribly exploitative or tragic victims. ‘Gaslight’ was a play written in 1938 that was turned into a Hollywood movie in 1944 starring the extraordinary Ingrid Bergman, suave Charles Boyer, all round good guy Joseph Cotten, and a very early glimpse of the legendary Angela Lansbury. It’s probably not a spoiler to reveal that the Boyer character turns out to be a villain, having cruelly isolated his wife and made her emotionally dependent on him, for financial gain. During his many unexplained absences, the lights in the house dim… but he persuades her that she is imagining this, as well as misplacing items, and so on. The theme is that the husband pretends to be kind, caring and concerned about his increasingly frail wife, while in reality being the cause of her vulnerability. In this plotline, the villain is motivated by greed; he wants his wife institutionalised and out of the way.

Gaslighting in its current sense in the context of domestic abuse is not about hidden jewels, but appears to be about manipulating someone to doubt their own grip on reality, as some sort of power game. I doubt Patrick Hamilton’s estate is even consulted – but is it helpful for a play set in Victorian society to influence current law and policy? Let’s see how it’s being applied.

This isn’t a comprehensive analysis, but a quick scan of BAILII shows nine cases in the family courts (and Court of Appeal relating to family cases) that feature the term ‘gaslight’. These don’t lead to a consistent view of what judges think it means.

‘The mother accuses the father of ‘gaslighting’, a form of mental manipulation which the father explained to me is a reference to the 1950’s film “Gaslight” in which a husband creates a number of small incidents which combine to drive his wife to insanity.’

This allegation was not proved in this particular case.

‘During his submissions [barrister] referred to coercive control and other techniques of psychological coercion, such as ‘gaslighting’. He submitted that the husband could have used such techniques to manipulate the wife into believing that she had agency when, in reality, she was under his control. However, whilst those submissions are interesting, they do not reflect the wife’s case. She does not allege that he used any such techniques to manipulate her.’

‘The mother’s case was presented on the basis that she had been subjected to a decade of aggression, verbal abuse, criticism, gaslighting, and then an episode of physical abuse in May 2019. Over the years it was said that the mother had had to seek treatment for PTSD and an anxiety disorder because of the father’s behaviour’.

Judd J here assumes we all know what gaslighting is.

4. On the other hand, in F v M [2021] EWFC 4, just last year, Mr Justice Hayden, sitting as a High Court judge in the family court indicates he has never come across it:

‘Ms J’s case illustrates a further dilemma. Her mind has become so overborne by F’s behaviour that her own autonomous decision making has become compromised. Mr [barrister] has advanced his client’s case sensitively but with complete fidelity to his instructions. In his written submissions he has referred to “gaslighting”. I have heard no evidence about this, and I am not familiar with the term, but in so far as it coins an expression for behaviour which leads a person to question their own thoughts and perceptions and yield to those of others, it accurately reflects Ms J’s situation. At present she remains resistant to those who wish to help her and adamant that she requires no help. She is surrounded by people who care for her, not least her sons who worry about her. I hope that she may find a bridge back to her family and to those parts of her former life which meant so much to her. [my emphasis]’

5. AB v CD & Anor [2021] EWHC 819 (Fam) is interesting because it’s an appeal where Mrs Justice Roberts records that the family court judge (Recorder Armitage in Leeds Family Court) had herself applied the description of gaslighting –

‘Of the mother’s acknowledged psychological frailties in the early days of their relationship, the judge recorded as a fact that the respondent mother had been emotionally dependant upon the appellant. There had been episodes when she had self-harmed and provoked in the appellant accusations that others might perceive her as “psychotic and strange” as a result of her self-harming. The judge described that behaviour as a form of “gaslighting”. She contextualised the respondent’s accepted failure to make any complaint prior to the formal application for contact as resulting from the control which he exercised over her.’

6. Gaslighting is listed amongst a series of allegations by a support worker in a judgment from HHJ Dancey in A Child (Application of PD12J) [2021] EWFC B59. Lucy Reed has written on this case at Pink Tape. At the second hearing, HHJ Dancey refers to one of the mother’s allegations as ‘he had lied to her and consistently sought to undermine her and control her emotionally, intellectually and physically and manipulated her financially’ as part of a pattern of controlling behaviour. However, he makes no direct reference to gaslighting and, eventually, did not find her allegations were proved.

‘Whilst I acknowledge that the concept of “parental alienation” causes controversy in some quarters – some advocates for victims of domestic abuse allege it is used to gaslight mothers”, I am satisfied that the CAFCASS tools on parental alienation can be crucial in identifying harm in some cases.’

I’m wondering where HHJ O Neill has seen ‘gaslight’ used by advocates, because it isn’t rife in published family court judgments, whether or not linked to alienation.

‘He [father] was challenged as to M’s account that she immediately raised with him having heard him mention the word shake over the phone to his solicitor and his then claiming that he had said it to her before. He stated that he did not recall that he had said that. Mr [barrister] suggested that he had used this as a way of gaslighting her by claiming he had mentioned it earlier. It was also suggested he was doing the same by the discussion around their interviews and him telling her that she had the sequencing wrong. In my judgment, Mr [barrister]’s suggestion was correct.’

What seems to have happened here is that the judge found the father to have deliberately attempted to taint the mother’s evidence about the child’s injury by making her doubt her own memory.

‘I am satisfied on the evidence that the father did indeed repeatedly allege that the mother suffered from bipolar disorder; I further and significantly find that there was no clear medical evidence that she did suffer such a condition. Although there was a provisional diagnosis at one time (though unclear on what basis), the mother’s GP explicitly reported that he did not consider that she had a bipolar disorder. On the evidence which I have seen, it seems to me likely that the mother did suffer from depression, anxiety, and mood swings; her mood was affected by excessive drinking and/or very occasional drug-taking and/or by the inconsistency of the father’s relationship with her. In this state, at times she threatened to self-harm. I find that the father made this purported diagnosis in an attempt to characterise her to third parties as mentally unstable and/or unreliable; I find that it was immensely disparaging and undermining of the mother, damaging to the mother’s self-confidence and self-esteem, and caused her to doubt her own mental health (“he made me believe that I was mentally unwell … He convinced me that I had bipolar when I was never diagnosed with it… He made me out to be mentally ill”). [barrister] ‘s use of the term gaslighting in the hearing to describe this conduct was in my judgment apposite; the father’s conduct represented a form of insidious abuse designed to cause the mother to question her own mental well-being, indeed her sanity. The assertion to the mother and others were ostensibly given greater credibility by the fact that at the time the father was a mental health nurse; he may be thought (and doubtless wanted to be thought) to have drawn on specialist expertise or experience to make his diagnosis/assertion.’

I think Cobb J has got to the essential danger of gaslighting here, where he says ‘the father’s conduct represented a form of insidious abuse designed to cause the mother to question her own mental well-being, indeed her sanity.’ The judge considered explicit evidence that the father was ‘diagnosing’ his partner as mentally ill.

I couldn’t find anything in the 2015 guidance on coercive and controlling behaviour that looked or sounded like gaslighting.

The current procedure rules and practice direction on how the court should deal with a case which involves issues of domestic abuse, PD12J, defines controlling behaviour as: an act or pattern of acts designed to make a person subordinate and/or dependent by isolating them from sources of support, exploiting their resources and capacities for personal gain, depriving them of the means needed for independence, resistance and escape and regulating their everyday behaviour. This may well cover the sort of manipulation present in some of these cases, but the PD does not contain anything close to a definition of gaslighting.

Domestic abuse often involves emotional or psychological abuse. This can include:

… Persuading a victim to doubt their own sanity or mind (including “gaslighting”).

I don’t think this is at all helpful. Why ‘include’ a description, especially of a word in inverted commas, without defining what it is? As the cases here show, some judges are not familiar with it, others ignore it, and others mention it in passing. I don’t think that a parent in court who heard about ‘gaslighting’ for the first time, as an alleged victim or an alleged perpetrator, would find much reassurance from Patrick Hamilton’s legacy, or even Ingrid Bergman’s. I’ve read compelling memoirs of victims of this sort of behaviour, but if we are going to incorporate the notion of gaslighting into law, it needs a clear definition in the guidance.