The Spotlight Review on domestic abuse – where does it fit in with other court reforms? 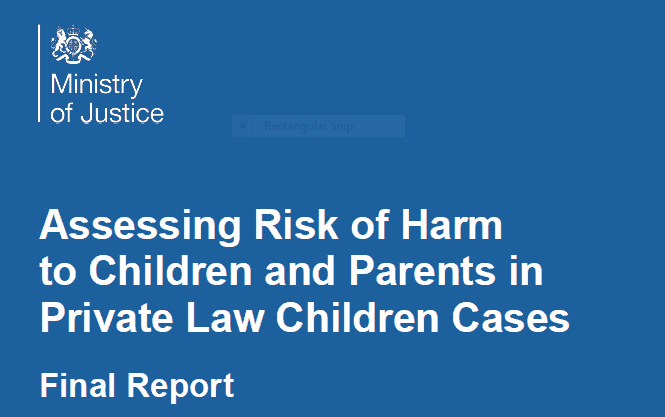 The work undertaken by the ‘spotlight panel’ appointed by the Ministry of Justice, reported in what is being referred to as the ‘harm report’, has already been commented on here and here. Its full title is ‘Assessing Risk of Harm to Children and Parents in Private Law Cases’. The purpose of this blog post is to try to see how the harm report fits in with the wider reforms discussed by the President’s Private Law Working Party (the PrLWG) in its two reports.

The PrLWG was originally reviewing the effectiveness of the Child Arrangements Programme i.e. very much about the fairness and efficiency of procedural matters in private law disputes about contact and residence. The group was working in the context of the President’s concerns about the courts’ inability to cope with the volume of private law cases. It first reported in June 2019, made some suggestions for consultation, and then published a further report in March 2020. Just prior to publication of its first report, the spotlight review was set up by the Ministry of Justice in response to the escalating claims that children were being sent by courts to unsafe contact, culminating in the Victoria Derbyshire show in May last year. A separate piece of research undertaken at the University of Sussex revealed lawyers’ concerns about the lack of attention being paid to the correct procedures (Practice Direction 12J), designed to protect victims of abuse, in magistrates courts. That report was published in February this year.

This report had little to say about domestic abuse, partly because ‘review of the operation of PD12J is outwith the specific remit of the Private Law Working Group’s terms of reference’ but also in the light of the newly announced Spotlight Review. The report did however emphasise that the integrated provisions of PD12J should forcibly remind the court of the seriousness with which it needs to consider domestic abuse, in its widest sense, wherever it is alleged. The report went on to say that any changes recommended by the Spotlight Review would be incorporated into the PrLWG’s ongoing work.

When this report was published in March 2020, the spotlight panel had still not completed its task (having been overwhelmed with responses) and could not therefore be incorporated. The second report also mentioned the Domestic Abuse Bill (passed in the Commons last month) and that a working group on the Family Justice Council had recently consulted on best practice guidance on responding to cases in which domestic abuse is alleged. This best practice guidance hasn’t yet been issued, and no Minutes of any FJC meetings have been published on its site for a year, but we understand that the guidance is on hold. The report sums up its own approach as follows:

‘The PrLWG is clear that, when considering the issue of domestic abuse, it is necessary to distinguish between short term heightened conflict which is a common feature of separation but is not necessarily or always harmful; persistent/chronic, unresolved conflict which is much more likely to result in emotional harm for the child with long-term consequences, and which will need to be taken into account when making a plan for child arrangements; and domestic abuse (in all its forms) which is undoubtedly harmful. In each case it is important for the court, the parties, and the professionals to focus on the impact on the child as part of a wider assessment of family/parental dynamics which will not be confined to domestic abuse (as Cafcass/Cymru have commented, reference needs to be made to ‘alienating behaviours’ or similar as part of these wider dynamics).’

Although this conclusion does now appear rather weak, it’s fair to say that the PrLWG were probably not aware of just how shocking the harm report was going to be.

On a more helpful note, they also said:

‘The PrLWG notes that consultees were on the whole supportive of PD12J, though less confident about its application. The PrLWG considers it essential to await the conclusions and recommendations of the MoJ ‘Harm in Private Law Cases’ panel before committing itself to a view on interim contact under PD12J, or indeed on any revisions to procedure which are affected by PD12J. It is important … that courts should not ‘rush to judgment’ on re-establishing contact before assessing why it is not happening.’

They also went on to say that there was no funding available to meet the need across the country for supervised contact that might mitigate the impact of delay, and that ‘a more reliable solution to the vexed issue of interim contact would be to ensure that ‘urgent’ cases are processed by the court in a timely way towards decisions which are safeguard-checked and in the interests of the child.’

These observations were of course made before the additional delays and stresses of the Covid lockdown.

The report identified four themes arising from its evidence:

Resource constraints; a pro-contact culture (respondents felt that courts placed undue priority on ensuring contact with the non-resident parent, which resulted in systemic minimisation of allegations of domestic abuse); working in silos; and an adversarial system, with parents placed in opposition to each other with little or no involvement of the child.

While the messages about resource constraints and working in silos reflect and support the conclusions of the PrLWG, there is an apparent gulf between acceptance of the PrLWG of the pro-contact culture and the recommendation in the harm report that the legal presumption of ongoing contact be reviewed. As the harm report itself points out, the senior judiciary have been promoting the pro-contact culture in the context of human rights law for years, so it would be surprising if the PrLWG took a different line. The second PrLWG report seems to contain assumptions about distinguishing between ‘short term heightened conflct’ which is ‘common’; persistent conflict that may be harmful; and abuse. However, the harm report received evidence from a range of participants that abuse situations were often reframed as mutual high conflict. The report includes as one of its several key knowledge areas: Interactions and distinctions between risks in complex cases, namely, domestic abuse, child sexual abuse, parental alienation, drug and alcohol abuse, mental health, and high parental conflict.

The theme about the adversarial system is more complicated. The PrLWG are arguing hard that fewer parents should resort to court. Its first report cites Cafcass (England) as estimating that 60% of its cases involve allegations or issues of abuse. That would mean that 40% should be able to take the non-court dispute resolution services the PrLWG is trying to encourage. (These proportions are guesswork, because the research review by Adrienne Barmett which was published alongside the report found varying figures of allegations and/or findings between 49% and 70% of cases.) However, alongside identifying the adversarial system as a problem, the harm report also criticises the aim of reducing dependence on the court. They say that, although diverting parents into mediation or other non-court dispute resolution is appropriate in some cases, this is not appropriate where there are allegations or concerns about abuse. A significant problem here, as we have emphasised in our guidance note and in our responses to consultations is that, for myriad reasons, genuine and well-founded fears of abuse are not always raised in pre-court or application stages. This is also clear from Dr Barnett’s research review.

What is the next step?

The President (and all of us) are presented with a conundrum. Although The Transparency Project is quoted on page 43 of the harm report as considering ‘that family courts balance the desirability of contact and the management of risk in an appropriate way’, we did not say this in our response and don’t understand why we have been represented as holding that opinion. Although TP members have varying views on aspects of this topic, none of us think that the courts are currently able to manage these issues well, although, like most readers, we were taken aback by the extent of serious crticisms uncovered by the spotlight panel.

It may well be that even the authors of the harm report were taken by surprise by the amount of evidence they received about how little notice is taken by the courts of PD 12J and of the work of the PrLWG to date. We are, however, working in a pro-contact legal framework, premised on the right of a child to continue a relationship with both parents. Based on human rights law, even before the presumption introduced in 2014, the Court of Appeal emphasised the positive obligation on judges to reconstitute the relationship between parent and child by making every effort to enforce contact (page 132). Despite this case law, there are plenty of complaints elsewhere about fathers who feel they are wrongly excluded from seeing their children. We can see glimpses of this point of view in the report’s references to concepts such as ‘the implacable mother’ and ‘parental alienation’.

It would appear that the only way forward is to establish a system where parents who can safely co-operate are encouraged and enabled to work together; protective parents and their children are taken seriously; and where the concept of a child needing two parents is not placed above all other considerations. The Minister’s response to the harm report appears proactive, but a partial solution to the report’s four pages of recommendations is unlikely to be any solution at all.

Our guidance note on what to expect in a family court hearing where there are domestic abuse issues is still available to download here.