The Public and the ‘Future Court’ 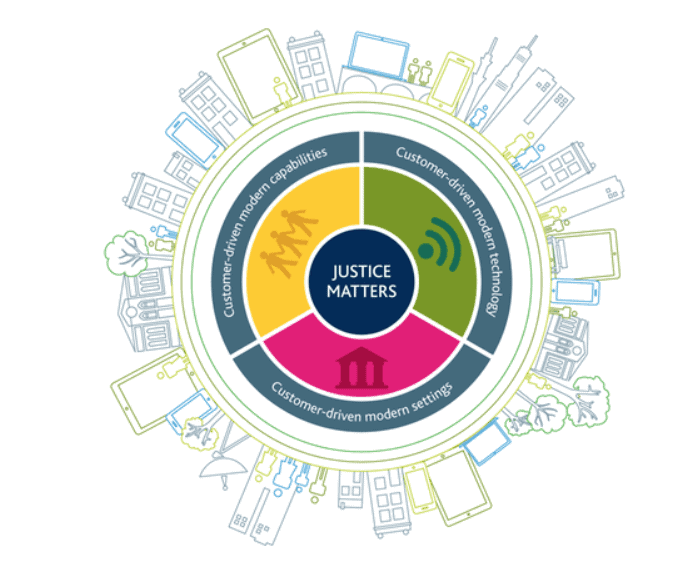 This is a joint post by Alice Twaite and Judith Townend

A Future Court and Tribunal Service Built for Users was the title of Tuesday’s HMCTS annual public event to inform court users and their representatives about progress of the court modernisation programme, 12 months since the last such update. HMCTS have committed to a just, proportionate and accessible system while transforming how people obtain access to justice through greater use of technology rather than paper-based processes, moving some cases online and introducing some virtual hearings.

Given the Transparency Project’s longstanding call for public interest stakeholder representation in the court reform process, particularly in the area of open justice (see, for example, our response to the original ‘Transforming Our Justice System’ consultation), it made sense to seize the opportunity for engagement.

The event followed a week in which strong criticisms had been made of the modernisation programme. Among the pre-election flurry of Parliamentary committee publications has been the House of Commons select committee on Justice report, which warns of the potential dangers for vulnerable users and a “court system in administrative chaos”, as well as the Public Accounts Committee latest review which states that the concerns raised in its previous report in 2018 have not been adequately addressed.

The Justice Committee report indicates (among other things) the lack of a transparent, embedded open justice strategy, or adequate evaluation of access to justice impacts, particularly for vulnerable users. (Parts of our submission to the Justice Committee inquiry feature at paras 163-169 of its report.)

In its initial response, HMCTS suggests that the report does not offer a balanced assessment, though says it will consider the findings carefully. On the open justice criticisms and recommendation (for the creation of a judiciary-convened working group), they suggested an existing working group had been overlooked:

However, as we have suggested before, it would be good to see this working group widened to members working outside of the traditional media, including those from not-for-profit and research backgrounds:

Additionally, we would like to see events such as this recent roundtable in Cardiff, include voices from the third sector and academia.

Other constructive responses include one from the Legal Education Foundation; its research and learning director, Dr Natalie Byrom (seconded to HMCTS for three months last year), has urged HMCTS to include a commitment to urgently embedding a transparent evaluation strategy in line with Access to Justice standards from the Digital Strategy report delivered to HMCTS last month (ostensibly welcomed by them):

Elsewhere, the case for further social research on the impact of reform is made by Penelope Gibbs of Transform Justice, who argues that the current HMCTS model of research and evaluation misses measures of deeper access to justice (access to the formal legal system; to an effective hearing; to a decision on the substantive law; and to a remedy) particularly for vulnerable and unrepresented court users.

Gibbs focuses her concerns on online hearings in a criminal law context but these principles are not without resonance for family law users now and in the future. As the justice committee report confirms, HMCTS are already testing applications for injunctions by victims of domestic abuse where the applicant and their solicitor appear by video from the law firm’s office in the Manchester Civil Justice Centre (para 63). And it would seem that only final evidence based family law hearings are off the table for online hearings in the longer term, in the eyes of the senior judiciary (para 78)

So it was in this context of enduring concerns about the reform agenda that we arrived at Tuesday’s event.

Among the sessions was a chance to sign up for specific updates on family law, criminal, civil and tribunal reform, and presentations on user support, reform evaluation, or the longer term future.

The event also promised the chance to ask questions and to learn more through a ‘market stall’ set up featuring different aspects of the reform programme including cross cutting areas like Open Justice, as well as specific initiatives such as Common Platform and Video Remand Hearings.

We took along the following questions:

What we took from the day

The day offered a useful update on the stage of reform with respect to the family courts since publication of the Summer 2019 written update; all slides can be accessed via this page.

We learned of an exercise undertaken by HMCTS with the Cabinet Office’s Policy Lab that explored public perceptions of open justice. While we endorse public engagement on the topic (and previously have called for proper public consultation on this aspect of reform), we have a number of questions about the methodology of the research and are concerned that it doesn’t drill down into the specific characteristics of different jurisdictions (i.e. civil, criminal or family). It doesn’t, in our view, replace the need for robust empirical research on public attitudes and user/public impacts.

The day also ended with some useful thoughts from High Court Judge Robin Knowles (also co-chair of the Litigants-in-Person Engagement Group, LIPEG), on the enormous nature of the venture and the responsibility of all stakeholders (HMCTS officials, the judiciary, users, the advice sector, the academic sector) to play their part in ensuring the courts programme works, and to seize the opportunity to change with that programme. Among his observations, he acknowledged that for a long time the system had missed opportunities to learn from ‘information’ and emphasised that the importance of data and information was now recognised. There was now an effort to capture data and use it “well”.

Overall, we have come away with our over-arching questions still unanswered, though we were grateful for some of the ‘micro’ insights offered at the stalls and in the talks.

As yet, the open justice strategy – in particular as it relates to the family courts and the current Transparency Review being overseen by the President of the Family Division – is not clear to us. In relation to other jurisdictions, there are still many unknowns about listings, about access to video hearings, about ways in which online methods of justice will be publicly observable (both in terms of cases and the process itself).

While we acknowledge that the overall objective of the day was broad and deliberately ‘showcasing’ progress, we feel that it didn’t really offer deep user engagement of the sort that is so profoundly needed in the reform process.

We now await the HMCTS considered full response to the call for the MOJ to evaluate the impact of court reform against the legal standard of access to justice summarised in TLEF’s “Digital Justice” report, and the Justice Committee’s recommendations, including that:

In the meantime we are encouraged by this contact from HMCTS that it intends to involve other stakeholders in open justice work. Needless to say, we’re happy to participate. We hope we will have more to report back soon and would be interested to hear from Transparency Project readers on your views on court reform in the family and other jurisdictions, and the implications and opportunities for improving the fairness and transparency of the legal system.

The Transparency Project is a registered charity in England & Wales run by volunteers who also have full-time jobs. We’re working hard to secure extra funding so that we can keep making family justice clearer for all who use the court and work within it. We’d be really grateful if you were able to help us by making a small one-off (or regular!) donation through our Just Giving page. You can find our page, and further information here.