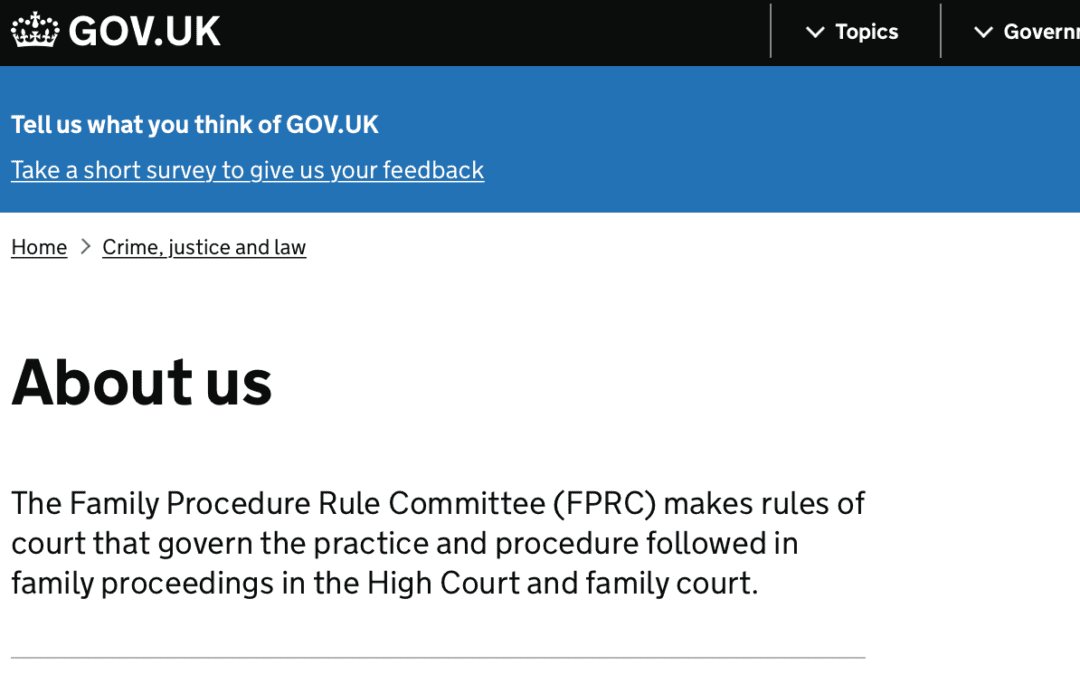 The minutes of the Family Justice Rules Committee (FJRC) meetings held on 7 February and 7 March 2022 are now transparently published.  This is speedy compared to previously, and compared to the time it takes other hard-pressed family justice bodies like the Family Justice Council and Cafcass to get minutes up.

The 4th April meeting minutes will take a bit longer but we’ve pasted some highlights from the February and March meetings below.

The Rules Committee Minutes can be a bit impenetrable especially for non lawyers. But they are a welcome and invaluable way of trying to piece together the pieces of where certain reforms have got to and what’s going on underneath.

1.2 The Secretariat has received extremely positive responses to the questionnaire sent out to those who attended the 2021 Open Meeting. A majority of the returns favoured future Open Meetings continuing on a remote basis. The Committee agreed with this approach. [We assume this is a reference to continuing the relatively new annual open meeting initiative].

6.1 MoJ Policy updated the Committee on the proposed changes which stem from Section 67 of the Domestic Abuse Act (DAA).

6.2 The Committee were concerned that the PD [Practice Direction 12Q presumably.  Mentioned in the March minutes below] focussed exclusively on domestic abuse and proposed that amendments to [section] 91.14 [that’s the bits intended to clarify and widen the legal test for making ‘barring orders’; https://transparencyproject.org.uk/domestic-abuse-act-2021-what-does-it-mean-for-family-courts-and-the-people-using-them/ ] be re-drawn to correspond with Court of Appeal decision EA1749 amongst other points of reference. [This is a reference to a November Court of Appeal decision: A (A CHILD) (supervised contact) (s91(14) Children Act 1989 orders) [2021] EWCA Civ 1749 (23 November 2021): https://www.bailii.org/ew/cases/EWCA/Civ/2021/1749.html  We’re not sure when this judgment was published but we hope to write about it].

10.1 MoJ Policy updated the Committee on a number of unauthorised disclosures resulting from the process of making and serving police disclosure orders. The Committee referred to the 2013 Protocol and Good Practice Model on Disclosure of Information in Cases of Alleged Child Abuse and Linked Criminal and Care Directions Hearings’ and to note the Committee’s steer that the Protocol requires revision. The Committee advised further consideration of the issues was necessary and proposed that both short- and long-term solutions should be put forward in a further paper. [This doesn’t make sense on its own but is made clearer by the March minutes below**]

11.1 Proposals have been made to amend the FPR [Family Procedure Rules] provision relating to permission to appeal. MoJ Policy introduced the issue, noting that any solution should take into account the impact on the commonalities between the FPR and the Civil Procedure Rules. The Committee agreed work should be undertaken to amend the FPR in the way proposed by a Committee member, but noted consultation may be a requirement before any changes are made.

6 ACTION POINT 14: MoJ Policy and Legal to prepare a paper outlining a timeline for the next steps, draft FPR changes and consideration of the need for a consultation for the April 2022 meeting. [Without trying to cross-reference the FPR and CPR we are guessing this may be going to amount to a further restriction on rights of appeal]

16.1 The Committee discussed the need for clarification on e-bundles and whether PD27A [Practice Direction PD27A https://www.justice.gov.uk/courts/procedure-rules/family/practice_directions/pd_part_27a ] still applies especially in light of the recent President’s guidance issued in December 2021 [ https://www.judiciary.uk/publications/message-from-the-president-of-the-family-division-guidance-on-e-bundles/ ]. The Committee also discussed the need for ‘lead-in periods’ when efficiency statements are issued.

7 ACTION POINT 19: MoJ Policy and Legal consider whether PD27A ought to be amended in light of the recent Guidance from the President and the recent FPR Efficiency Statement. [This should presumably say Financial Remedies Court (FRC) Efficiency Statement: https://www.judiciary.uk/announcements/notice-from-the-financial-remedies-court-2/ ]

ACTION POINT 20: MoJ to bring an update and timeline for this work to the April 2022 meeting.

THE TRANSPARENCY REVIEW [Our Heading]

21.2 The Committee briefly discussed proposals for media reporting pilots put forward by one of the subgroups of the President’s Transparency Implementation Group (TIG).

ACTION POINT 27: MoJ Policy and Legal to prepare a scoping and timeline paper on Transparency related pilots for March 2022 meeting.

6.1 MoJ Policy reported that the FPRC [Family Procedure Rules Committee] consultation relating to the proposed New Practice Direction 3B that closed on 11 February. Work has commenced to consider the responses received.

It is hoped that the item will be brought back to the April FPRC meeting following consideration by the DA [Domestic Abuse] Working Group.

ACTION POINT 4: Issue to be discussed further in April 2022, if appropriate consideration by the DA Working Group and preparatory work has taken place.

6.2 MoJ Policy explained that following comments from the Committee on the drafting of new PD12Q at the February 2022 meeting, MoJ Policy and MoJ Legal would need to redraft sections and seek the input from the DA Working Group before returning to the Committee with an updated draft. [Sounds like the new draft PD12Q ‘barring orders’ mentioned above which isn’t online to link to yet].

10.1 MoJ Policy noted that Practice Direction 30B [https://www.justice.gov.uk/courts/procedure-rules/family/practice_directions/practice-direction-30b-appeals-transparency], which covers transparency in appeals, was not amended at the same time as other provisions when the legal bloggers scheme was piloted and later made permanent. The Committee agreed that the relevant changes should now be made as it was an oversight, rather than an explicit decision at the time of the original changes.

ACTION POINT 10: MoJ Policy and Legal to progress changes to PD30B as part of a future Practice Direction Update so that the provision for media representatives is mirrored for legal bloggers.

11.1 MoJ Policy advised that a policy paper outlining the implications regarding the President’s Transparency Implementation Sub-Group proposals for a media reporting pilot would be brought to the April 2022 meeting, together with a proposed timetable for their implementation. The Committee were keen that the issue is fully discussed at its April 2022 meeting. [What’s published so far at the TIG section of the Judiciary website is here and here].

ACTION POINT 11: MoJ Policy and Legal to return with a policy paper for the April FPRC meeting.

12.2 MoJ Policy introduced the issue, referencing the proposed short-term solutions to ensure that confidential contact details are not disclosed to parties on orders for police disclosure [**our bold and asterisks]. The Committee advised that they were of the view that a combination of the options for the short-term Public Law solution should be progressed.

12.3 The Committee asked whether clarification could be provided on how this work would be taken forward in working with two unrepresented parties; and where the police redact information, then who would check the detail.

12.4 The Committee agreed that the recommendations in relation to the Private Law proposals should be adopted, but that a further paper looking at the operational practicalities and the potential need for wider consultation should be prepared for April.

12.5 The Committee suggested that HHJ Moradifar should made aware of the potential changes due to his work with on the current Standard Orders.

ACTION POINT 12: MoJ and HMCTS to progress work on the short-term Public Law solutions agreed by the Committee.

ACTION POINT 13: MoJ Policy, HMCTS and MoJ Legal to prepare a paper for the April FPRC setting out the draft PD and FPR changes necessitated by the short-term Private Law solutions. Paper will also set out the operational impact of any proposed changes and the plans for any form of consultation.

ACTION POINT 14: Mrs Justice Knowles to make HHJ Moradifar aware that work on the Police Disclosure issue is being progressed.

b) Legal Professionals and levels of confidentiality

23.2 The Committee noted a suggestion in the judgment in LS v PS [https://www.familylawweek.co.uk/site.aspx?i=ed228532] that the level of confidentiality in respect of Financial Dispute Resolution appointments should be “dialled down” if a party has acted with unambiguous impropriety. The Committee agreed not to take any further steps on this suggestion.

23.3 The Committee were informed of progress made on compiling details of the outcomes in financial remedy applications, which it is hoped will provide a useful guide to parties seeking to resolve financial matters. The Committee noted that some Rule changes may be necessary further down the line. [See Harvesting Data at the Transparency Project site here].