Headlines from the latest Cafcass open Board Meeting 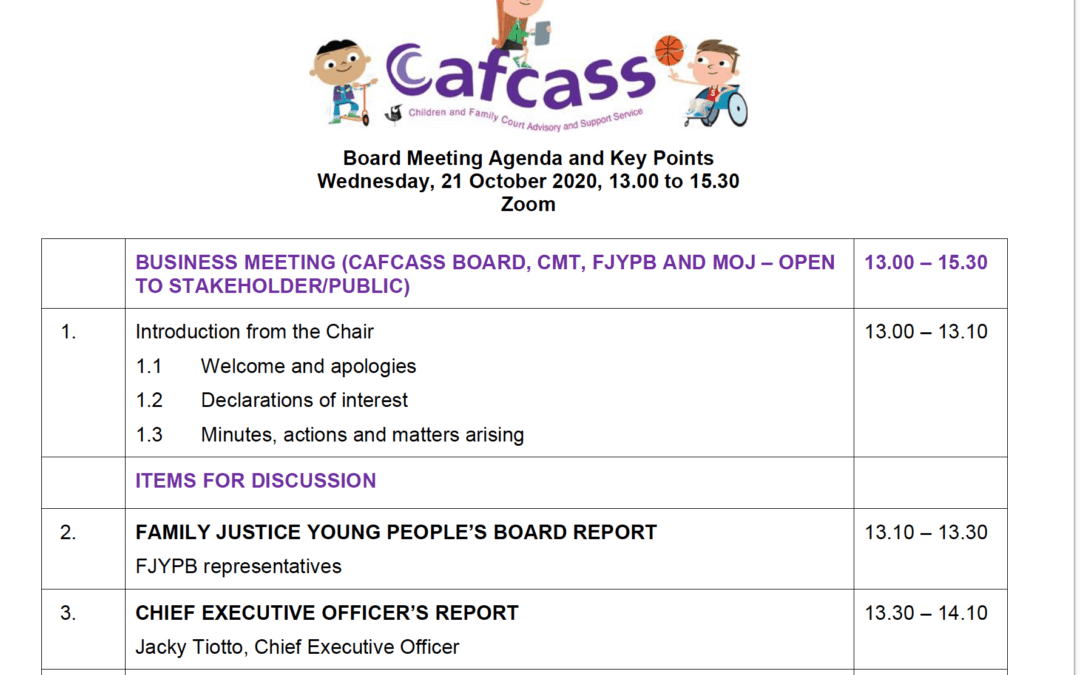 The Transparency Project get regular invitations as stakeholders to the two board meetings Cafcass (England) try to hold in public every year to promote transparency, engagement and trust. There’s been a gap because of Covid but we attended (virtually) the latest open meeting on Wednesday 21 October. CEO, Jackie Tiotto, and others, reported to the Board and took questions. Cafcass publish full minutes here 3 or 4 months after board meetings. In the meantime here’s a few headlines we took away:

The pandemic – After moving fast in March to 100% remote working, Cafcass have had little increase in sickness related absence and are still on the ‘safely opening back up again’ journey they began when lock down started to ease in May.  They are meeting regularly with other family justice partners within the national covid recovery group including on coping with back logs.

Open offices – 16 offices are now open. They are on track to have the rest safely open by end of November.

Seeing children – Cafcass say that seeing children and families remains their number one priority and that they are monitoring the Covid impact on this carefully.  A ‘children seen’ audit of 200 children seen over the past 3 months starts this week. Figures since June show just 53% of children in cases recorded as seen, of which 30% were recorded as seen face to face. (They suggested that introduction of a new measuring tool may have affected these figures). They intend to continue to use a mix of remote visits where appropriate, with in person where assessment suggests a particular child needs face to face. Their expectation is that they see all children in person at least once during a case and some children in person more, situation depending.  Some children and young people are reporting a better experience meeting Cafcass virtually rather than in person. Staff report real gains in terms of saving time to spend more with children and families, write reports etc by way of less travel and wait at court time. If caseloads weren’t rising from increased demand and court delays, they’d be finally getting some respite from already overloaded case loads (see below).

Workload – They are monitoring work flow via a new app and we heard that significant staff time gains from working at home allowed them to get more actual core work done. This is nevertheless being offset by radically reduced through-put of cases through the courts and rising demand, including a spate of addendum reports directed in adjournments. They are planning on the basis the situation may continue for the next 12-18 months. Slides shared indicated that at 12 October 2020, there were 36,625 open active cases (where there was known future work for Cafcass). This figure is increasing at an average of between 100 – 300 cases per week. The volume of open active work is therefore +19.4% / +5,959 cases compared to October 2019. Cafcass told us all indicators are clearly showing that staff will not be able to continue to absorb the growth, notwithstanding an MOJ grant of £3.4million overspend going towards staffing capacity; a new temporary agreement*[see UPDATE below] with the judiciary to close cases off to Cafcass after safeguarding letters and s.7 reports are filed; and reduced need for early hearings where a s.7 report is plainly needed, under new Practice Direction 36Q.

Emergency Protocol –  If this trend continues, they expect to have to trigger the emergency protocol (currently waiting in the wings) by January 2021, ending lower priority work. What will count as ‘lower priority work’ was not identified but we might guess that this means prioritising public proceedings like care proceedings and private law proceedings that involve significant risk of harm such as allegations of domestic abuse.

Morale – Cafcass acknowledged real impacts in terms of morale on frontline workers and middle managers trying to support them and carry case-loads.

Learning from the Harm Report

Cafcass have publicly committed for some time (at least since Theresa Williams, head of strategy moved over from the Nuffield FJO) to learning from and influencing research, and driving a push to identify and plug gaps in the family justice research base alongside partners.

In September 2020, they announced a new research committee, chaired by Theresa Williams, Head of Strategy, to oversee the research element of their projects.

On 9 October, they announced their first Learning and Improvement Board to oversee priority learning from challenging findings in the Harm Report on failings in the family court system in protecting victims of domestic abuse and their children in private law cases. The panel is jointly chaired by the CEO of the Family Rights Group, Cathy Ashley, and founder member of the FRG parents panel, Angela Frazer-Wicks. Women’s Aid, Families Need Fathers, Respect and Southall Black Sisters are all represented on the board alongside family members and the Family Justice Young People’s Board, as well as judges, social services, the ALC, and the Family Justice Observatory. The Board will oversee a learning review and produce a Learning and Initial Improvement Plan by January 2021. Success will be judged (at least in part) by increased trust in Cafcass, including from family members and stakeholder groups

This was all re-iterated at the open board meeting. But we also learnt:

Cafcass is one member of a wider Family Justice Reform Implementation Group meeting monthly and reporting to the Family Justice Board. Private law reform is the priority and Theresa Williams, Cafcass Director of Strategy, also sits on the private law working group headed by Cobb J due to report imminently on private law reform. It will be interesting to see how the Harm Report findings have affected the push for a public health focused treatment of family separation involving diversion and triage.

See this January 2019 post for the seeds of Cafcass’ work with FRG to set up a family forum as part of a longstanding commitment to embed listening to children, young people and parents into performance evaluation and service planning.  Cafcass have long established an independent FJYPB who provide genuine challenge to their practice. They are now making good on promises to develop their Family Forum, in parallel to the learning from the Harm Report work strand on responding better to victims and survivors of abuse and their children. The first Family Forum Meeting will be in Spring 2021.

Credit as always to Cafcass who have led for some time among statutory justice agencies with their open board meetings and consistent publication of minutes.  On 27th October they published this series of updating blogs by Jackie Tiotto too.

Cafcass asked for feedback on their new meeting format which included a more interactive style with presentation of key themes from reports aided by slide sharing with attendees. The new format did enliven what is necessarily quite a long business meeting. Cafcass have always provided written headlines from the reports that we don’t see (that are being presented to the Board), attached to our Open Board Meeting Agendas. [UPDATE 6/11/20 AT – The Agenda is now published here with the CEO’s report to the board]. These remain useful.  Sharing slides and talking at the same time is always difficult, as most people don’t listen and read well at the same time, and stakeholders don’t have copies to take away. I did a bit of screen-grabbing (strictly as a memory aide) and wondered if Cafcass anticipated that. The remote format meant I could see the names of board members speaking (though not their job roles), unlike in a physical setting. I could also hear what they said, and see the slides far better than in the physical setting. What I couldn’t see was who was in the audience, or even how many attended.

We (Transparency Project) submitted questions ahead by email, as requested, but something seemed to go wrong as the Chair said they’d had no questions. As it happened, we got the updates we had hoped for anyway (on seeing children and on research / responding to the Harm Report).

The next Meeting is 20 January 2020 1 p.m – 3.30pm. Members of the public can attend if successfully registering ahead.

[*UPDATE 8 November 2020 AT – Cafcass have responded here to a subsequent request for clarification of these new temporary agreements to close off work formally to Cafcass, from Lucy Reed (Chair of the Transparency Project). We’ve also been in email communication with Cafcass about improving communication more generally with the public and professionals about such local variations and initiatives arising from the Family Justice Recovery and Reform Groups. They are reflecting on this, in consultation with the Private Law Working Group, who are due to report shortly on reform of the private law family court.]