Headlines from the latest Cafcass Open Board Meeting: the emergency protocol, domestic abuse, and young people’s views on transparency 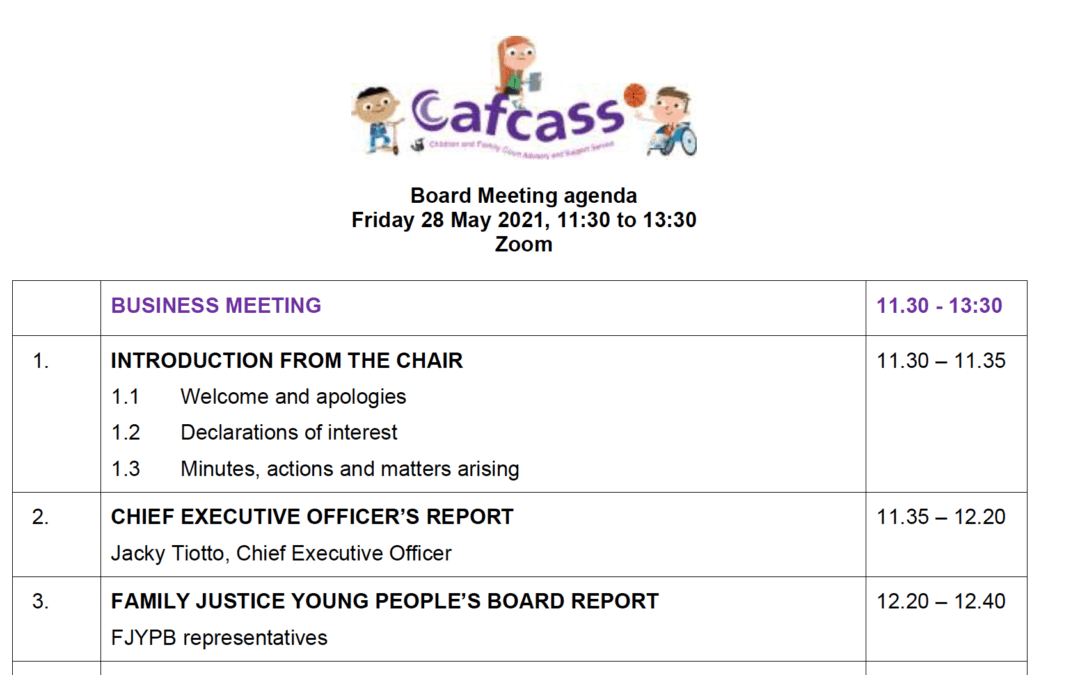 At the latest Cafcass Open Board Meeting we asked about news that Cafcass are starting to trigger their prioritisation protocol and open allocation hubs for private law cases in some areas, and for an update on handling of domestic abuse cases. The Family Justice Young People’s Board (FJYPB) also shared their views on transparency:

Cafcass wrote to practitioners at the end of May to say they are activating a (long anticipated) prioritisation protocol and are also now setting up allocation hubs in areas where they can no longer cope with demand. We asked what this meant for families and how it fitted with pre existing wider private law reform plans to implement early triage & allocation to risk, returner or mediation track, so as to divert as many families as possible (where safe to do so), away from the family courts to non legal services

What it means for families

Cafcass said it means that once they’ve done initial safety checks, they will ask for court permission to formally delay allocating certain private law cases to officers for work such as s.7 reports. These cases will be held in ‘allocation hubs’, with families written to, waiting times capped, and cases kept under review. (They said last year that this would affect private law cases without known safeguarding issues. We can’t see the protocol published anywhere right now).

The plans do dove tail with the wider private law reform programme say Cafcass eg. families will have early access to the Separating Families Programme (SPIP), usually available only later in the process. They describe the move as a temporary measure of last resort to bridge the gap /crisis while waiting for the wider reforms. Pathfinder pilots are underway in Wales and Dorset. National roll out is not expected until 2022 after evaluations. The selected pilot areas were first announced in February at a Nuffield Family Justice Observatory event – alongside research data showing private law case numbers haven’t risen since 2014. Cafcass seem to say Cafcass Officer case loads are rising largely because while new cases continue to flow in, old cases are not closing due to Covid related adjournments and addendum reports, translating to overwhelm notwithstanding time gains from virtual working.

Cafcass still say these are short-term measures (of last resort) but they are also clearly saying that if things continue as now they expect to be saturated across the service within a month (presumably indicative of national roll-out). They also say extra MOJ funding has already been provided to set up the allocation hubs. And that feedback from families is that they are already negatively affected by allocation delay so this is a way of managing that delay safely with oversight, transparency and better communication. Local areas are selected through a scorecard system based on capping reporter caseloads at 25 and releasing practice supervisors from overflow caseloads. Each decision then goes through a scrutiny meeting process.

Which areas are affected so far? – The latest we’ve seen suggests:

Last autumn Cafcass committed to a Learning and Improvement Board  to oversee priority learning based on the findings of the Harm Report,  a promised internal case file audit, and the outcome of practice observations and focus groups. The L& I panel is chaired by the Family Rights Group, with Women’s Aid, Families Need Fathers, Respect, Southall Black Sisters, family members, the Family Justice Young People’s Board, judges, social services, the ALC, and the Family Justice Observatory all represented. A Learning & Improvement Plan would be in place internally by January 2021 and they would publish first an interim progress report by summer 2021, then a final report with action plan by Spring 2022.

The management report to the January 2021 board says the outcome of their autumn 2020 audit of 200 case files featuring domestic abuse (against Harm Report Finding themes) was that things weren’t good enough in just 8% of cases. It identified these areas for improvement:

And these as priorities for management oversight:

We asked what the 8% figure meant for Cafcass’ response to the Harm Report and commitment to reform. And for an update on progress ahead of the report due in summer eg. what percentage of staff have been joint trained with the judiciary so far, and how reform aims of better challenge to unsafe contact orders and better distinguishing high conflict from abuse are being met and measured?

Cafcass said that they had identified learning from all cases not just the 8% they considered inadequate from their audit and remain committed to reform. They say they have already incorporated the findings from the Harm Report, their own audit, and Ofsted findings into both their Learning and Improvement Plan and their training programme. Distinguishing between abuse and harmful conflict, and coercive control, are core elements of both.

Nothing was said on the stage of roll out of apparent joint training with the judiciary. But there is another open board meeting on 7 July and given the L&D interim report is due for publication in July it may well be presented to the Cafcass Board then.  [UPDATE 25 JUNE 2021. Now published here]. The published letter from a recent Ofsted visit is here. It makes no specific reference to how domestic abuse cases are handled.

The FJYPB view on transparency

The Family Justice Young People’s Board (FJYPB) told the Board they had given oral evidence to the President’s transparency review in addition to their earlier responses on the topic in 2015 and 2020. They shared the findings of a recent survey of their members:

They also asked how young people would feel if a case was published about them (even if it didn’t include a real name or personal details); and how they’d feel if friends or local people could read it. They quoted young people expressing concern and anxiety as well as one with no concerns. It would be helpful to know how many young people were asked and the basis of quote selection (eg did they represent all replies or a majority etc. It would also be helpful to see the full submission given they are asking for people to reflect on their views. Far more was said than we refer to here. Hopefully the submissions of all those who gave oral evidence on the 11th May will be published here shortly.

And whether young people would still express their needs, wishes and feelings if there was a possibility that they were read out in court and included in the published judgments. The majority said they still would but the FJYPB then quoted some replies suggestive that this could affect how some did so. Again it would be helpful to know how many young people were asked and the basis on which they selected the quotes.

There was a clear consensus on not allowing the public to sit in court on family cases (91% of members. Up from 63% in 2015 and 79% in 2020).  (We should say here that we are not aware of anyone advocating for the public to attend children’s cases as now occurs in the Court of Protection, unless ordered otherwise).

They asked what else might be done to achieve either greater openness or more confidentiality in family courts and quoted various views (again we don’t know the basis of the quote selection).

They concluded that member views have remained consistent since 2015 and reflect a high level of opposition from FJYPB members to transparency in the family courts. They asked that people try to imagine how it would feel to have some of the most personal and private details of one’s life published in the media, and also invited engagement via FJYPB@cafcass.gov.uk

And a final point of interest

Cafcass referred to a recent media article about their Social Work Academy as total and utter rubbish and wondered about its source. We’ve looked for the offending article without success so far. We’d like to see it, if any readers can direct us to it. [UPDATE 16 JUNE 2021 AT: Cafcass kindly forwarded this link to the article at CYPNow (with another there written by Cafcass staff)].

[FURTHER UPDATES 25 JUNE 2021 AT: (1) We’ve linked above to the Cafcass Domestic Abuse Learning and Improvement Plan published on 17th June (2) The headline message presentation slides of the CEO report to the board now being regularly published are here. (3) Cafcass have expanded of their own initiative by letter on their oral answers to questions put at the last open board meeting and we attach that below. (4) Cafcass have helpfully confirmed they will answer our pre submitted question to the 7 July Open Board Meeting for response in writing as we can’t attend. We will publish the reply here in due course. We’ve asked:  Is there any overlap between the cafcass internal learning review and the government review of the presumption of parental involvement? Both appear to involve a case file review and we are unsure whether the review was of the same files in each instance or not, and whether the presumption review was conducted by cafcass or some other person / group using cafcass case files. ]