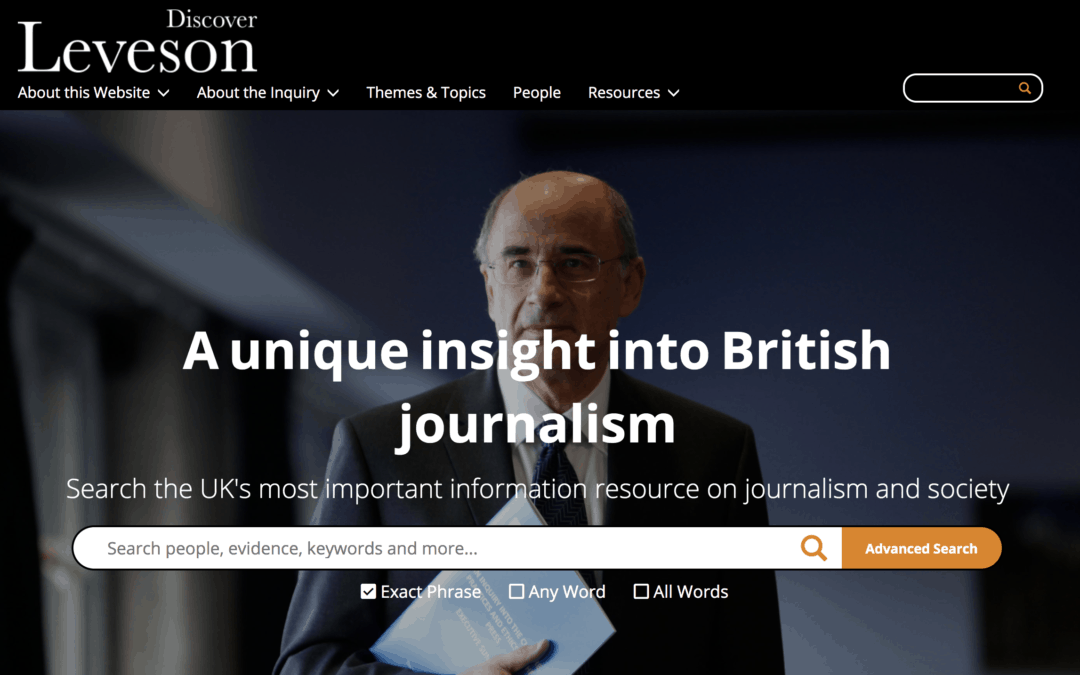 A comprehensive and interactive online research resource, containing all the evidence and publications of the Leveson Inquiry into press misconduct (2011-12) has been developed and hosted by Kingston University under the leadership of its Professor of Journalism, Brian Cathcart.

Discover Leveson was officially launched on 2 April 2019, at an event just off Westminster Square. Sir Brian Leveson himself spoke about the resource, much of which would not have existed but for the decision to live-stream and record the inquiry and all the evidence of the witnesses. Although that greatly increased the inquiry’s transparency, he had initially been reluctant to allow it, for three reasons.

First, that it would him and counsel for the inquiry, Robert Jay, under too much pressure; second, it would allow certain witnesses and perhaps even barristers to grandstand – talking to the camera rather than to the chair; and third, it seemed counterintuitive to ask those who complained of press abuse to speak about that complaint in public.

But he was persuaded by an alternative argument: if they didn’t stream the inquiry, how would everybody find out what was said? ‘Could we trust the press fully to report it?’ Every single victim of press abuse, having been told what would happen, voluntarily came forward and provided evidence.

He ended by saying he thought Discover Leveson was a brilliant and important resource. He did not want this report to end up on the dusty second shelf of a professor of journalism, never to be looked at. What this did was to keep the question of ‘who guards the guardians?’ alive. And that could only be in the public interest.

There followed a panel discussion, chaired by Brian Cathcart, with journalist Liz Gerard, who writes for the New European, BBC presenter Nomia Iqbal and Hardeep Matharu of Byline Times (a new newspaper whose launch edition was distributed at the event) followed by questions from the audience. The discussion ranged over topics including the state of British journalism; the need for objective factual reporting at a time when people feel entitled to their own truth, their own facts; and the shortcomings of current media regulation.

Discover Leveson itself is a brilliant resource. Although the original Leveson Inquiry website has been preserved by the National Archives, it was ‘structured according to a logic that made sense for a live inquiry’ and is no longer suited to ongoing research. Discover Leveson is a comprehensive, fully searchable and freshly curated educational resource which is free to use and has been organised around themes including Law, Regulation, Journalism and society, Ethics and abuses, and the Police. All the witnesses are listed and, along with a short biographical introduction, you can both watch their live testimony and read their evidence.

A simple example of the much better way the new site works is that you can find and view the video recording of the session featuring a particular witness, and see their written testimony, all from the same page. On the archived official site, they are stored separately (though linked) and you need to know which session they appeared in before you can find, somewhere in the midst of it, that particular half-day’s video recording. (It’s not even clear that those video recordings are still accessible, though you can read the transcript.) Moreover, the video recording on Discover Leveson is linked to a scrolling display of the full transcript underneath. The pages are also clearly laid out and well designed. In short, the site more than lives up to the promise that it can be used ‘easily and even enjoyably’.

At the launch event, Cathcart took the opportunity to announce the excellent news that their next project would be to build a similar resource to re-house all the proceedings and publications of the Macpherson Inquiry into the Stephen Lawrence case and the conduct of the Metropolitan Police.