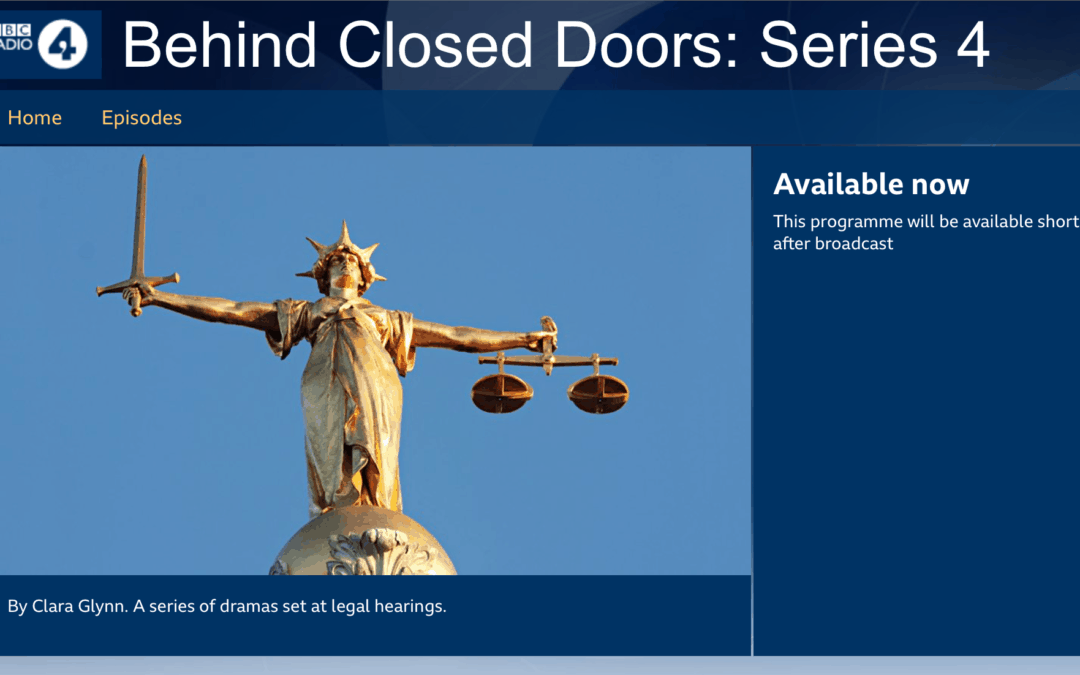 This is a guest blog post from Clara Glynn. Clara is a Scottish based writer and television director with Hopscotch Films.

I write Behind Closed Doors, which is now in its fourth series.  My background is documentary television, but I’ve a lot of lawyers in my social network.   I noticed that some of the best work stories my lawyer friends were telling me over a drink at the end of the week were outside crime, whereas the legal fiction I read, listened to and watched always seemed to be crime related.  So, Behind Closed Doors tells stories about the most interesting, difficult and engaging legal stuff that’s happening in the Court of Protection, the Family Courts, hearings, tribunals and even mediation sessions.

I research these dramas as though I was making a documentary.  Bailii is a great resource for me.  As are blogs like Suesspicious Minds, The Masked AMHP and, of course, The Transparency Project.

I try, whenever possible, to get to court or a hearing and sit in at the back.  There’s nothing like being in the room to pick up the texture, the moments of drama but also the mundane details that I hope make what I write feel real.   I have vivid memories of my time in a Glasgow employment tribunal, sitting in the Court of Protection and the Family Courts.  Although it can be very hard for an outsider to work out what’s going on where and when. Sometimes the Royal Courts of Justice can feel like you’ve gone down a Victorian rabbit hole.  I’ve had great support from court officials; and even, on one memorable occasion, was whisked round the back to take tea with a Family Court judge.

These dramas are entirely set in and around the courtroom.  The most challenging plays to write are the ones where I haven’t been able to get into a court or hearing.  My play about a TPIM (terrorism order), my mental health tribunal play and my school exclusion play were all cases where I wasn’t allowed to sit in.  In these cases the interviews I do and the time I spend with the lawyers involved become even more important.

Once I’ve worked out what I’m trying to write I approach the lawyers who specialize in that area.  One of the great joys of my professional life over the last few years has been the willingness of brilliant and very busy barristers and solicitors to give up their time (without payment, or even, sadly given Radio 4’s credit rules, acknowledgement) to make sure that what I write accurately reflects their experiences.    Some of them not only spend their time answering my questions but then agree to read the plays in draft, to make sure I get it right.  It’s remarkable, and really appreciated.

I aim for realism without betraying confidentiality – so the stories I write are all based on truth, – without being any individual’s story.

Do please listen next week – or catch up on the BBC I-player for a month after transmission. And if you’d like to let me know what you think – or tell me what else I should be writing about – I’m clara@hopscotchfilms.co.uk

Emily has severe anorexia.  Can her doctor force-feed her or should she be left to die?

As a divorced dad should Yossi have to stick to the strict rules of Orthodox Judaism in the way he raises his kids, although he no longer believes them?

Harry is a healthy happy eighteen year old with a mental age of seven who wants to have sex, his mother thinks he’s too vulnerable. What should the Court of Protection decide?

When Julian died he left everything to his 22 year old dog walker, his adult children are furious; who should get the inheritance?

When Daniel was put on trial for murdering his son, his baby daughter was taken into care.   Now Daniel is found not guilty. Should he get his daughter back?