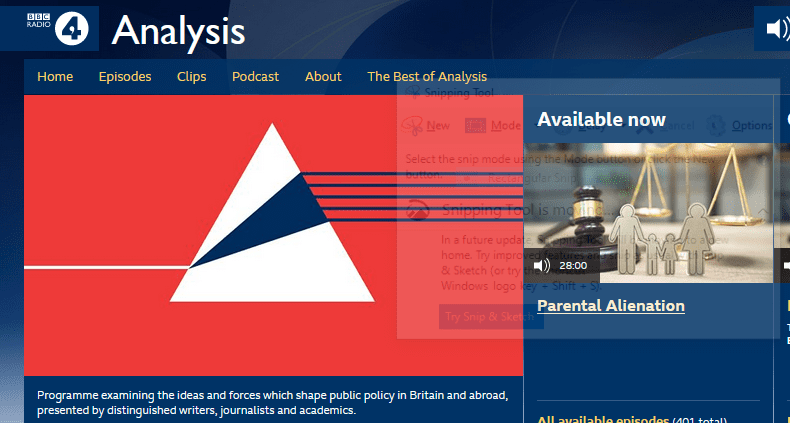 On Monday 25 October, BBC Radio 4 broadcast a programme in its ‘Analysis’ series about Parental Alienation. The programme is repeated today Sunday 31 October at 9.30 p.m. and is also available as a podcast. The presenter of the programme is journalist, Sonia Sodha.

I was interviewed for the programme. Other contributors are Dr Jaime Craig, clinical psychologist; Sarah Phillimore, barrister; Jean Mercer, who is a professor in psychology at Stockton University, USA; and Ursula Lindenberg from Voices domestic abuse charity.

Transparency Project Chair, Lucy Reed, live tweeted the half hour programme. We had a few comments and queries on her tweets, so I’m writing this short post to try to answer some of those. The producer and presenter had to pack an awful lot in. so it’s not surprising some points in this highly contested debate may have been dealt with quite briefly.

The history of parental alienation – there was a question on twitter about why the section on history ‘started with Richard Gardner’. It’s true that PA had its roots before Gardner came up with the term ‘parental alienation syndrome’ in the 1980s, and he isn’t the actual start point of the concept. I probably talked about 1970s California, but this got edited down to Gardner. It’s understandable that many involved in PA have tried to get away from Gardner’s ideas, which were extreme. However, he is still widely cited and is still seen as authoritative by leading PA proponents. I think it would be inaccurate to discuss the history without mentioning him. However, he isn’t the whole history – which you can read about in full in chapter I of this new book.

Controlled trials – Jean Mercer has researched and written widely on the therapies and treatments for PA that are marketed in the USA. In the programme, she said there was a problem that there were no controlled trials of treatment for PA. Some comments were made on twitter about the ethics of experimenting with treatments on children. This certainly wasn’t being suggested though. As Professor Mercer’s clip was so brief, I asked her to explain more fully. She says:

Interventions of all kinds need to be tested for safety and effectiveness by methods that use a treatment group and a similar control/comparison group. If it is not shown that treated individuals have better outcomes than those who are untreated/treated in a different way, it can’t be ascertained whether the intervention is beneficial, without effect, or even harmful. It’s possible for methods, intended as treatments, instead to exacerbate a condition or even cause adverse effects from emotional distress to suicidality.

Professor Mercer is co-editor, with Professor Margaret Drew, Law Faculty, University of Massachusetts, of the book I mentioned above, now available to pre-order at a reduced price – Challenging Parental Alienation: New Directions for Professionals and Parents. The book includes a chapter co-written by a young person who was subject to one of these treatment programmes when a child.

Secret family courts – there were quite a few anecdotal claims about PA and domestic abuse flying about in response to the programme, in the context of perceived injustices behind closed doors. We hope that Thursday’s news about the President’s Transparency Review is a step toward achieving better information about how the courts and expert witnesses deal with these complex matters.

Image: from the BBC website. Not an inappropriate gavel in view of PA being imported from American courts.