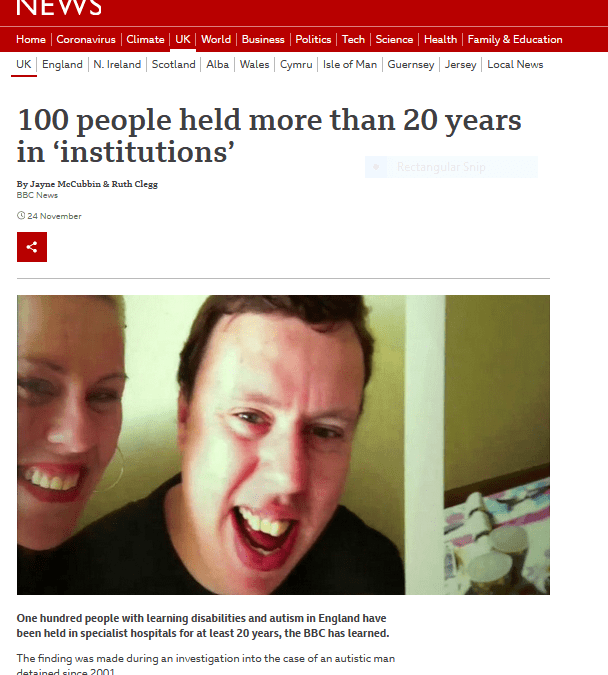 On 24 November, the BBC broadcast the story above. The Court of Protection (CoP) judgment, PH & Anor v Brighton And Hove City Council [2021] EWCOP 63, has now been published on BAILII. The full name of the case is: PH and RH v (1) Brighton and Hove City Council (2) Brighton and Hove Clinical Commissioning Group (3) CareTech Limited  (4) NHS England and  (5) TH (by his litigation friend, the Official Solicitor) and The British Broadcasting Corporation and Sky UK Limited. It is about allowing Tony Hickmott’s parents (PH and RH), to speak out about his and their wish for him to be able to live with or near them. The ongoing CoP proceedings relate to an application made in 2019, some years after Tony’s parents were informed in 2013 that he was fit for discharge from hospital (where he remains because no accommodation has been found for him.) The public interest issue is that Tony has been detained in a hospital more than 100 miles from home for 20 years. Tony is autistic and has learning disabilities and epilepsy. He has not been involved in any court proceedings other than in relation to his own welfare. The first four respondents listed are all involved in Tony’s care.

(Note: We recognise that that Tony Hickmott is an adult aged 44 but we are calling him Tony in this blog post, as this is how he is described in the media reports, although he is described formally as Mr Hickmott throughout the judgment.)

As put by the judge, HHJ Hilder, who is the Senior Judge of the Court of Protection [at para 17]:

the Media Applicants say that the facts of this extraordinary matter cry out for scrutiny through responsible reporting.  Mr Hickmott has been detained for almost two decades.  Such an approach to the duty of care to persons with incapacity is obviously a matter of public interest.  There can be no informed scrutiny, and no lessons learned, if the public and decision-making bodies do not know that the matter ultimately required the involvement of the Court of Protection.

We will outline the facts in the case and discuss some of the wider transparency issues.

Tony’s family was subject to a ‘transparency order’ made in 2019 by the CoP, although they had previously been able to speak to the media and had explained the distressing situation in some detail. As explained on the Open Justice Court of Protection Project site, a CoP ‘transparency order’ is in reality a type of reporting restriction order that sets out what can and can’t be published about a hearing held in public, in order to protect the person subject to the proceedings. The order here prevented anyone from identifying Tony in any reports on the CoP proceedings, nor who was providing his care. The BBC, Sky Broadcasting and Tony’s parents wanted the order disapplied, so that his situation could continue to be explained to the public. A good deal of information was already lawfully public. As the judge explained [para 15]:

because of the information already in the public domain – the Media Applicants say – the Transparency Order restrictions effectively prevent any reporting, because of the risk of jigsaw identification.  So the Media Applicants cannot sensibly conduct reasonable reporting of this matter. The interference with their Article 10 rights is therefore disproportionate, and moreover not actually what the Transparency Order was intended to achieve.

The judge decided that the order could be lifted, and hence the BBC, Sky and others were able to publicise Tony’s predicament, which is what his parents believe he would want to happen. All the media coverage we have seen is sensitive, respectful and highlights matters of major public interest. The coverage even prompted the issue to be raised in Parliament.

Who didn’t want the publicity and why?

The reasons are given by CareTech, who own the private hospital Tony is in. As noted recently by Martin Barrow, CareTech is making profits at between 21 and 28% on the fees it charges local authorities, and recently paid its shareholders a dividend of £14m. We can see why Mr and Mrs Hickmott are confounded by the amount of public money being spent for a facility that is not right for their son.

CareTech’s arguments against naming Tony were:

Unsurprisingly, some of the subsequent media commentary was very critical of this approach –

HHJ Hilder applyied the Re S principles of balancing the Article 8 and Article 10 interests:

Factors in favour of lifting the order were:

2. The parents’ support for reporting.

3. The amount of information already in the public domain meant that to forbid naming Tony would effectively mean no reporting at all.

4. To a lesser extent, the argument that ‘humanising’ a story by naming the person at its centre attracts more readers than an anonymous story would.

Factors in favour of leaving the order in place:

1. Anonymity is the “ordinary” approach of the Court, as stated in the relevant Practice Direction. However this is only the starting point. There was no direct evidence of Tony’s own views but, also, there was no evidence of any harm from previous publicity.

2. The heaviest factor in favour of anonymity was the risk of destabilising current care arrangements and making future care more difficult to arrange.  There was witness evidence that some carers had already requested not to be allocated to provide care because of previous publicity.  However, the judge concluded that this evidence was non-specific and she did not accept that any instances of behaviour problems had been caused by publication of information.

In conclusion, it was appropriate to agree to the media application to lift the order.

Open justice and arguments for protection of other peoples’ privacy

Similarly to many cases in the family courts, we see here an example of privacy arguments being made by others on behalf of an individual who is entitled to the protection of the court against harmful publicity. However, it is difficult to imagine how increased attention to the Hickmott family’s plight could cause them any harm, and Ian Birrell’s comment that the authorities were trying to silence them seems unfortunately plausible. HHJ Hilder was not convinced by the apparently thin evidence of some carers’ concerns as being sufficient to outweigh the arguments for openness.

On a more general level, it is interesting to note that the judge placed relatively little weight on the ‘naming propostion’ that the media needs a name and a picture to ‘humanise’ a story in the public interest before people will read it. She refers to the “What’s in name?” speech [para 63] In Re Guardian News and Media [2010] UKSC 1

What’s in a name? “A lot”, the press would answer. This is because stories about particular individuals are simply much more attractive to readers than stories about unidentified people. It is just human nature….

The crucial point here was that there had already been a good deal of publicity about Tony before the CoP proceedings began, and the media could point out the illogicality of the mere fact the situation was now in court being the reason it could no longer be openly discussed at all.

I have considered in particular Peter Jackson J’s observation at [17](b) of London Borough of Hillingdon v. Neary [2011] EWHC 413 (Fam), whereby he was entirely able to reject the possibility of irresponsible journalistic practices.  I have also considered the much more recent decision of Abbasi v Newcastle upon Tyne Hospitals NHS Foundation Trust [2021] EWHC 1699 (Admin), where the current President of the Family Division roundly says that the decision in Re Ward (a Child) [2010] 1 FLR 1497 is wrong, and asks why should the law tolerate and support a situation in which conscientious professionals who are not found in fault in any manner are at risk of harassment and vilification?  I am not satisfied that there is any evidence before the Court to reach a conclusion that there is such a risk.  More positively, I am satisfied that the Media Applicants intend to report responsibly and, of course, anything beyond that is beyond the ability of this Court to control.

In the 2010 case, Ward [2010] EWHC 16 (Fam), Sir James Munby, had stated that anonymity should not be granted to any particular class of professionals ‘unless there are compelling reasons for doing so’, but in Abbasi, Sir Andrew McFarlane said that, in view of the increased use of social media in recent years with the significant negative impact that unrestricted and general identification of treating clinicians and staff might generate, ‘compelling reasons’ were not required to justify their anonymity. The focus on privacy interests in Re S was the right approach. In PH, however, HHJ Hilder foresaw no such risk to anyone working for these four respondents. Since Abbasi, it seems that in any instance of concerns being expressed about the risks of intrusion or harassment of health or social care professionals who are involved in a case that is being publicised, there is no default position either way; the judge will apply the Re S balancing test to the indvidual facts to decide if professionals require anonymity.

We may therefore see more publicity about Tony’s case in the near future, and a more critical approach to blanket assumptions about anonymity generally.