A Crisis in allocating social work ‘Guardians’ to vulnerable children? And other news from the last Cafcass Open Board meeting 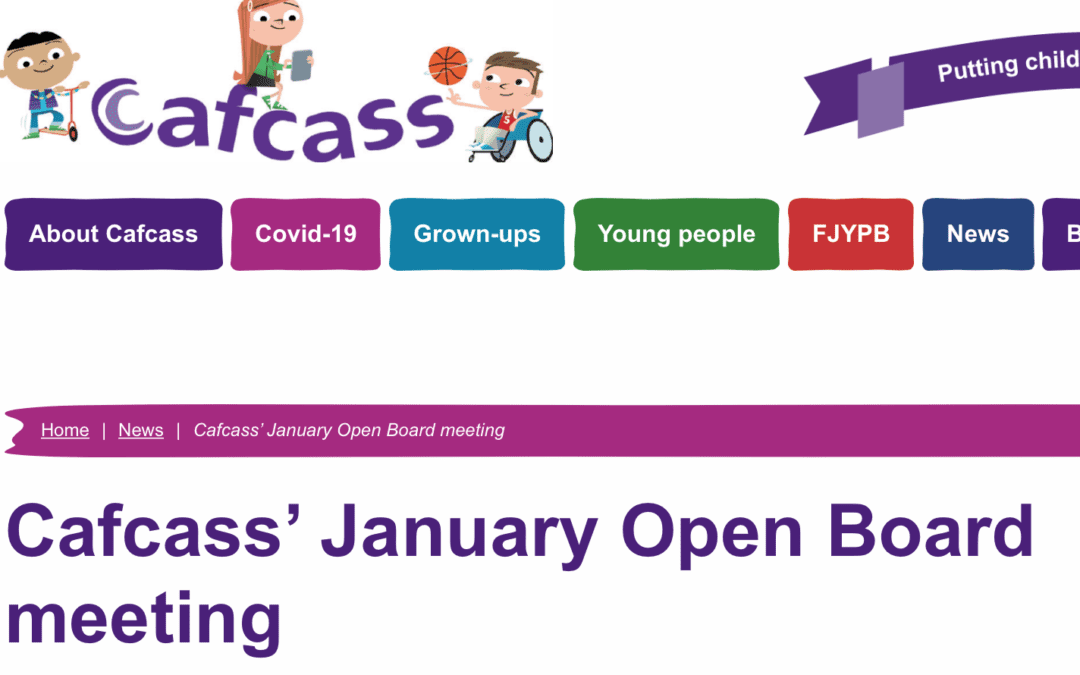 Cafcass have led for some time in opening certain board meetings to stakeholders and pre registered members of the public, and consistently lodging minutes on their website albeit a few months later. They now lodge not just the agenda but also the CEO report to every board meeting online, and take written questions ahead from the public. At the last meeting we heard that all board meetings are now public. Cafcass have also been active in efforts to enable the family justice system to better capture data for some time now.

I’ve been going to open board meetings when I can and reporting back on bits of interest:

A crisis in allocation of Guardians to vulnerable children?

Cafcass have long shared concerns about overload and a new prioritisation scheme where private law cases assessed as sufficiently low risk are allocated to wait in monitored hubs to manage workflow, as a matter of last resort in some areas. See our last blog and Community Care. We’ve also been hearing of problems allocating Guardians on the ground so asked this written question ahead of the last Open Board Meeting on 26 January 2022:

We understand there are places in England where neither Cafcass guardians nor NYAS contractors are currently available for allocation to new cases.  What are the arrangements for cases where Cafcass is unable to allocate (and in particular those where NYAS is also unable to provide a backup alternative), which areas are currently unable to allocate or have a delay in allocating, and what are the likely timescales for Cafcass normalising service in those areas?

Cafcass responded with the context and detail of their prioritisation protocol. And also said:

The protocol has been successful in that it has helped to manage the number of children’s cases allocated to family court advisers. It has helped to bring down the number of duty children’s cases held by service managers so that they have the time for management oversight, supervision, and support of family court advisers with the aim of maintaining the quality of our service to children and families and courts. A full evaluation is now in progress.

It will be interesting to see the evaluation results and understand the way success is measured in light of HHJ Wildblood’s short but striking judgment on 25 January, the day before the open board meeting.  That judgment makes clear that in the Bristol area at least, they’d reached the point where a court direction that an independent Guardian be appointed for vulnerable primary school-aged children in private law proceedings (involving allegations of coercive control and alienation) had to be discharged altogether since neither Cafcass nor NYAS could allocate, through no fault of their own, even after a 16 month delay:

In Autumn 2020 Cafcass committed to a Learning and Improvement Board  to oversee priority learning based on the findings of the  Harm Report,  internal case file audits, and the outcome of practice observations and focus groups. The L& I Board is chaired by the Family Rights Group, with Women’s Aid, Families Need Fathers, Respect, Southall Black Sisters, family members, the Family Justice Young People’s Board, judges, social services, the ALC, and the Family Justice Observatory all represented.

Cafcass provided a transparent time-table for progress promising a ‘Learning & Improvement Plan’ in place internally by January 2021, a published interim progress report by summer 2021, and a final report and action plan by Spring 2022. Their detailed Action Plan was published in June 2021. Link to it from here. Progress is monitored by the DA Learning and Improvement Board.

Slides presented at the January 2022 Open Board Meeting following the November 2021 annual Domestic Abuse audit told us that the time of the October 2021 annual DA audit, 49% of Family Court Advisers (FCA) had attended a Development Workshop. And that now over 1300 FCA’s have completed or got part way through the learning and development programme.  It’s difficult to know what this really means for how far domestic abuse specific training has been rolled out. Have less than half of all Cafcass Officers had domestic abuse specific training a year on? How does the workshop relate to the learning and development programme? Why count those who have started an online programme in with those who have completed it?  What percentage of the workforce is 1300 FCA’s anyway?

3 case file audits take place each year with one specific to domestic abuse annually we think. That last took place in November 2022.  Cafcass seemed to be saying that (read alongside the wider local and national audits, and external moderation) results showed:

They identify the following as priorities for practice improvement going forward:

Some complex barriers to Cafcass progressing faster (with solutions lying at strategic level) were briefly touched on too in response to questions by Board Members – Including the need for systems wide change given their place within the family justice system and the ongoing work of influencing Family Justice System partners to reform alongside.

The 20th January Cafcass update to stakeholders (on the website here) includes an update on private law reform. Cafcass refer to scoping a new model of working in private law through 2021 for pilot in five area in 2021, ready for implementation in 2023.

We assume this is integrated within the wider family justice private law reform programme where ‘Pathfinder pilots’ seem to have just got started in five areas in Dorset and North Wales, judging by rules changes in force from 21 February 2022. (Those rule changes for the pilots apply for 2 years to February 2023 by the way).

We wrote previously about the early, and relatively open, response of Cafcass among family justice agencies to the devastating conclusions of the Harm Report.  Cafcass seem to be saying that within / alongside the new FJS wide model for private law at the ‘pathfinder pilots’ stage, they are going to be testing a new model of core assessment (which includes early holistic assessment) and new structured services for complex cases (including those involving domestic abuse). Alongside better online information and resources (including self-help resources).

Brief reference was made to pioneering joint work with Essex Council on a shared approach, shared threshold, shared access to community resources to assist families beyond silos. We’ve also seen something on proposed revisions to guidance on who does s.7 reports which may be within this work stream – presumably designed to tackle head on the merry go round for vulnerable families between stretched, gate-keeping, publicly funded services.

The FJYPB members updated. Including on publication of their book – In Our Shoes: Experiences of children and young people in the FJS on 27 January at Shared Press.co.uk; their annual Voice of the Child Conference now fixed for 28 July 2022; their move towards having their own website; and with a reminder that membership is open to 17-25 year olds from a range of backgrounds.

The new Parents Forum is now up and running and has met twice.

The Cafcass Academy to grow their own supply of social workers and contribute to good practice is well underway. See recent website information here. The Board were told that a campaign for next year’s recruitment of current students into the Aspiring Programme and of NQSWs was underway. And that monthly Social Work Academy meetings were established to monitor the Academy’s achievements, standards and plans.

Brief reference was made to risk governance issues emerging risks arising from the Transparency Review though no detail emerged here.