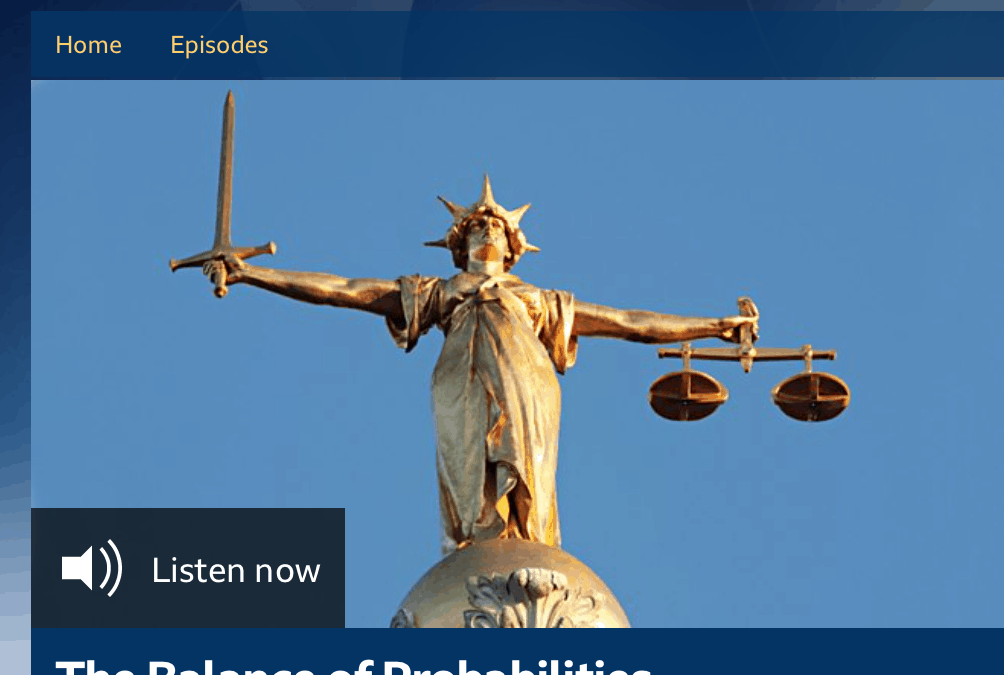 This is a review by new writer Delia Minoprio. Delia is a family law barrister at 1 Crown Office Row specialising in all aspects of children work. She tweets as @familylawdm

“When Daniel was put on trial for murdering his son, his baby daughter was taken into care.   Now Daniel is found not guilty. Should he get his daughter back?”

‘The Balance of Probabilities‘ is the last of five new BBC Radio 4 legal dramas, from a new series of Behind Closed Doors, from Clara Glynn. Each episode brings to life a real legal issue. This one aired on 17th January and is still available on catch up.

The play begins at the end of a criminal trial where a father is found ‘not guilty’ of murdering his baby. The mother and father are still together and the plot follows the ups and downs, and the emotional turmoil, of one set of legal proceedings ending while another set is just starting.

They have another child who is subject to care proceedings in the family courts where the civil burden of proof is the balance of probabilities, and the local authority need to prove it’s more likely than not that the injuries suffered by the baby were caused in a non-accidental way by one of the parents.

In real life, once the local authority can prove it’s case, and the Judge decides to make findings against one of the parties (this can be parents or any other party who had the care of the child around the time of the injuries) the court will then decide whether or not to make final orders and endorse the care plan put forward. The care plan can depend on the availability of suitable alternative carers (whether from the same family or a friend of the family) or it may be one of long term foster care adoption in the most extreme situations. There are also cases where children are returned to the care of one or both parents if it is safe to do so. Sometimes these orders are called ‘Supervision Orders’ where the children are ‘supervised’ by the local authority for around a year. This ‘supervision’ usually consists of visits to the family every three/four weeks or so.

In this story it’s difficult for the mother to understand why they can’t just have their other child back in their care after her partner is found not guilty in the criminal court by a jury. Family courts dealing with child protection matters where a local authority is involved have, at their core, the issue of the child’s welfare. There is no jury in the family court, it’s up to the judge to make the decision and this decision is made on the lower standard of proof which is the balance of probabilities. With the issue of the child’s welfare at the heart of public law family proceedings, the lower standard of proof is applied for the purposes of child protection, rather than punishing a perpetrator.  If you’re interested in this topic have a look at the judgment of Mr Justice Jackson as he was in 2015 in this case: https://www.bailii.org/ew/cases/EWFC/HCJ/2015/41.html

As a practitioner, more often than not, I’ve seen the family court kick into gear quickly with the aim of safeguarding the children as criminal trials seem to take a long while to finish.  Perhaps this story has the family proceedings afterwards for dramatic effect?

A couple of phrases used jarred slightly. In conference with his counsel the father refers to himself as a ‘pranny’. I haven’t heard that word since I was about 8 yrs old so it sounded a bit Grange Hill. (From the 80’s for those who don’t know). In court, the barrister for the parents refers to the barrister for the local authority as ‘My honourable friend’ when usually it’s ‘my learned friend’ or just ‘my friend’ though this is a small technical point. The barrister appears to be acting on behalf of both parents. This is inaccurate as parents are represented separately in family law proceedings but it’s entirely understandable that the play-writer has simplified this point for dramatic effect. (While we are on it, the child or children are always represented separately through their children’s Guardian who also instructs lawyers).

The pace is measured and flows nicely. The obvious strain to an adult relationship where one is accused of injuring one’s child is balanced well. There is a palpable tension between the mother and father who have just got through one set of proceedings only to be faced with another. The nuance in the range of emotions felt by parents (and the wider family) in these situations feels realistic.

The legal framework does not deal with the devastation that care proceedings can wreak on the life of the families involved. In that sense this story feels realistic. It’s an accurate representation of a  framework which attempts a sort of ‘best efforts’ approach but is not able to account for those unanswered questions.

In a story such as this one, in the family courts, parents are often told that they need to separate from each other in order to ensure they are safeguarding the children. This message might first come from a social worker for the child in question. It’s probably difficult to take advice from a party that, on the surface, appears to want to remove your children from your care.  Sometimes there are cases where if a parent can’t quite believe that their partner could have caused the injuries accidentally, it can be interpreted as a lack of insight on their part and included in the case against them as ‘inability to protect from harm’. It often takes weeks/months for the ‘non-perpetrator’ party to be able to understand and accept, sometimes even with the benefit of independent medical evidence, that the injury could have been caused by someone they love.

There are often cases where a judge decides that the children should be rehabilitated to their parent’s care after months of them having been in foster care, only allowed contact supervised by the local authority once or twice per week, for instance. There are other cases where other family members wish to step forward to care for the children, grandparents, aunts and uncles. However, with no automatic right to legal representation in care proceedings, unless they can pay privately or find a lawyer to act for free (eg. through Advocate), they might not have such a good chance of putting themselves forward as carer. Equally, local authorities are often hard pressed to provide as much support to families as they would like. I’ve seen a very high turnover of child protection social workers, some of whom have to come back from leave, a different agency or a different country to give evidence at a final hearing.

In this play, the barrister’s voice is calm, objective and helpful to the listener in explaining what the court is trying to understand when it deals with a case like this. One hopes that all barristers deal with their clients in this way.